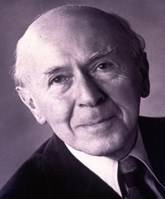 Professor Edward Joseph Lister Lowbury (President of the Society from 1980-1984) lends his name to an annual lecture awarded by the Society.

Since 1980 the The Lowbury Lecture has been awarded to a distinguished international speaker who is a pioneer in the field of infection prevention and control.

In 1998 and 2002, and 2017 the Lowbury lectures opened HIS International Conferences which were held in Edinburgh, the city where his namesake, Joseph Lister, pioneered the first practical expression of infection control.

A pioneer himself, Edward Lowbury was the doyen of modern infection control and his work on matters as fundamental as disinfection of hands and cleaning hospital floors is still pertinent today.

The Society is delighted to announce Professor Jan Klutymans as the 2022 Lowbury Lecturer. Professor Klutymans (UMC Utrecht) will deliver his lecture entitled Prevention of surgical site infections: a personal odyssey during FIS/HIS 2022.