We provide funds to support events where aspects of clinical microbiology, infection prevention and control, and healthcare-associated infections (HCAIs) are promoted to the public and other relevant stakeholders.

Events eligible for support can be diverse (pieces of art to popular music) or funds may be used to aid individuals to exhibit at public science festivals. The main criterion is that the event/activity must promote the science of microbiology in the context of (HCAIs).  Priority for funding will be given to activities/events that would not go ahead with HIS support. 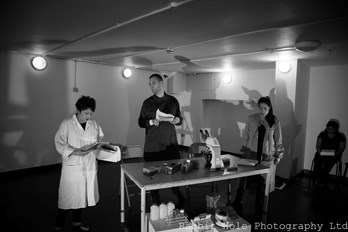 The aim was to create and test a play in which audiences could participate in the lab experience. The play was co-created with a group of scientists from across healthcare and academia.  Twenty four Healthcare Scientists from 8 institutions co-created the play across 3 workshops. Scientists worked directly with actors and a creative team. Scientists shared their experiences with colleagues and a playwright in the working group, and also with the general public through the play.  Nosocomial was programmed for 3 nights as a site-specific performance at Camden People’s Theatre during their September 2018 ‘Underground’ festival.

Nosocomial was extremely well received by microbiologists and general public. Scientists were enthusiastic about sharing their experiences with other colleagues in the working group, and with the general public in the play. Audience members previously unfamiliar with microbiology had the strongest reaction, of amazement they had known so little about healthcare science, describing it as “eye-opening”, “fascinating” or “astonishing”.  The intention is that the play will be developed for a full production in 2019, to be performed in theatres, and available for festivals and workshops. 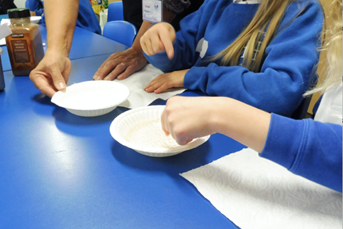 The aim of the project was to provide a fun, engaging and interactive session to help the children, aged 7-8 years, consolidate their understanding of the importance of hand washing with soap and water and introduce ideas of different types of microbes (viruses, bacteria and fungi).  This was achieved through a simple, but practical experiment observing the effect of soap on pretend pepper microbes in water and asking the children to design and build their own ‘helpful’ or ‘harmful’ microbes. A true or false quiz was held to reinforce key messages and pupils had a chance to quiz the ‘experts.’

Pupils enjoyed the sessions and were enthusiastic participants in all the activities. The final true/false quiz demonstrated how they had retained key messages of the importance of washing hands with soap and water and different kinds of useful and harmful microbes. The children asked thoughtful questions such as: ‘how are microbes born?’ and ‘what’s the most deadliest microbe?’ Teaching staff agreed that the session had been useful, engaging and fun.

Applications are open to:

Types of events considered (but not limited to):

What will you fund?

The grant can be used to contribute towards the costs of hosting of a single event or activity, such as venue hire and materials.

Funds, for example, may also be used to support travel (this must not cost more than 30% of the award) and attendance at the event (organiser, speaker or delegate), the development of resources for the event and production of educational resources for HIS use after the event.

Priority for funding will be given to events that would not go ahead with HIS support.

What are the criteria for funding?

In return for financial support, the event organisers will be required to:

The support from the Society will include:

Please submit the following documents by 11.59pm on the deadline day to grants@his.org.uk

Documents for your application